10 Types of Squat Variants to Break the Workout Monotony

Squats are one of the most efficient and useful muscle-building exercises in the world. There are many variations of the squat. 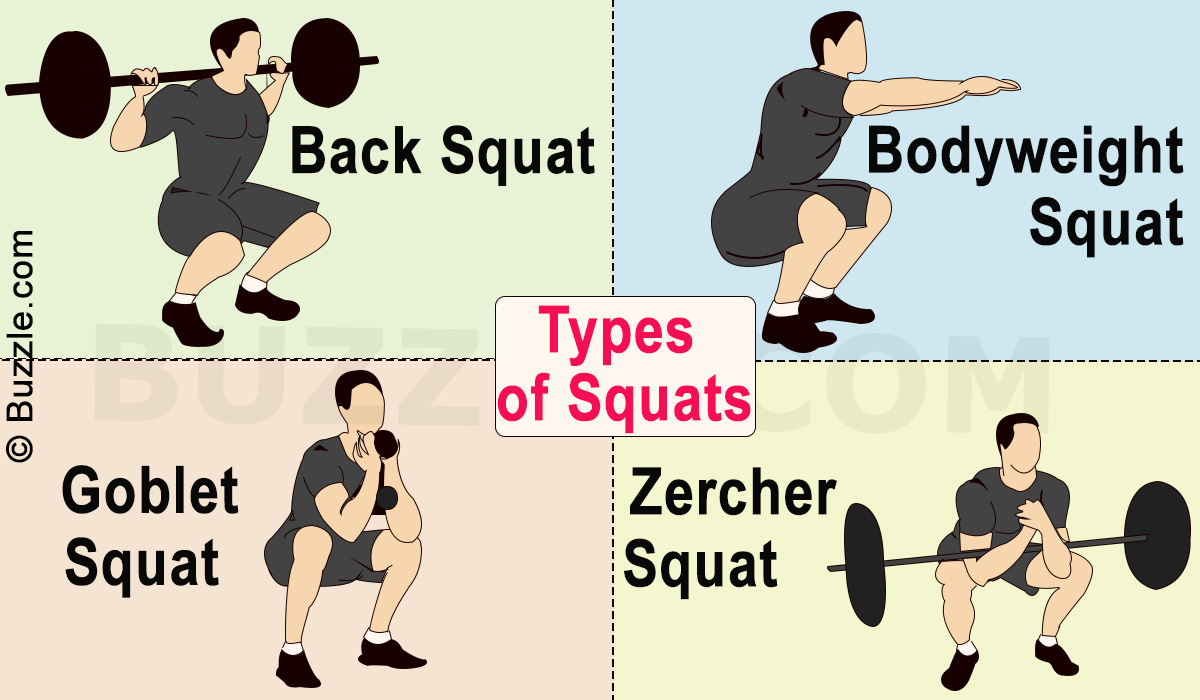 Squats are one of the most efficient and useful muscle-building exercises in the world. There are many variations of the squat.

The squat is one of the three powerlifting exercises, along with the deadlift and bench press.

Squats are a prime component of any muscle-building workout routine. They are one of the best compound exercises, and work a multitude of muscles to their limit with every rep. Hacking squats is the key to muscle-building as well as weight loss.

Like most other compound movements, an important factor behind the deserved popularity of squats is their easy accommodation of variations. Right from bodyweight squats, which can be performed by absolute novices with no great effort, to pistol squats, which require a very strong core as well as legs, squats can be readily modified in order to make them less or more difficult.

Here are some of the best-known variants of the squat, and instructions and tips for performing them.

10 Best Variants of the Squat

This is the most basic kind of squat, done without any weight. This is ideal for beginners just getting to terms with a bodyweight workout, since they are relatively easy to perform. In all the squat variants in this write-up, including the bodyweight squat, the point to remember is to go down below the point where your thighs are parallel to the ground, and not to lean forward when coming up. You can go down until your thighs and calves just about touch. Unlike weighted squats, bodyweight squats don’t work your hands as much, so perform a pushup routine in addition to the squats.

This solves the problem in the bodyweight variant, viz., what to do with your arms? Hold a dumbbell or kettlebell in your arms as you perform the squat motion. This will engage your core muscles much more vigorously, and will also include your bicep and shoulder muscles. If you easily progress to heavier dumbbells in this variant, you can try holding a sandbag or even a person in your arms. The best workout, of course, is first overpowering and immobilizing a person who doesn’t want to be held, but we don’t recommend that.

This is probably the hardest variant of bodyweight squats. Well, technically, you can try one-legged squat jumps, but like immobilizing a person for goblet squats, we don’t recommend that. Also, whether you would be able to do them is another matter entirely. A pistol squat consists of the same motion as a normal squat, done on one leg. This raises the load on the active foot to incredible levels. This is not a variant for beginners, and should only be tried if you have been doing easier squat variants (preferably plyometric squat variants) for quite some time.

This is the most basic plyometric variation of the squat. In jump squats, you go down like a normal bodyweight squat, but push off explosively so that you can jump in the same motion. If you can’t quite achieve the jump with just the push off the ground, do a normal squat, return to the normal standing position, and then add the jump in quick succession. If you can do more than 10 jump squats with relative ease, progress to dumbbell jump squats (as shown in the picture), or barbell jump squats.

This is the most commonly practiced version of the squat, and works nearly every major muscle group in the body, due to the addition of weight-bearing. The regular squat action works nearly all leg muscles, and due to the lifting of weight, arm and shoulder muscles are also engaged. The core muscles also get a harder workout in a weighted squat, since the torso has to play a considerable part in supporting the weight. Not rounding your back, important in any type of squat, becomes vital here, since the extra load can seriously hurt a rounded back. Also, going deep down is also more important in weighted squats than in bodyweight squats, since ‘power curtsies’, and the likes, put extra pressure on the knees, and combined with the weight, it can severely damage your knees.

This is the squat to do if you want to strengthen (did i say strengthen? Sorry, I meant ‘torture’!) your core and arm muscles really, really hard. In this variant of the squat, the barbell is held in the crooks in front of the elbows. This is, obviously, extremely stressful for the arms, and shouldn’t be done if you are not confident about your arm and core muscle strength. If not done properly or with weak muscles, this variant can cause serious bone and muscle injuries in the arms. Proceed with caution on this one!

This squat can be considered a ‘reverse deadlift’. In this variant, the barbell is held just behind the legs. The palms face backwards, and the arms are at approximately shoulder-width. Drop down until your buttocks just touch the barbell, but don’t rest on it; engage the core to keep you in position just above it.

This is a more difficult version of the split squat. Instead of performing a lunge while holding a barbell (or dumbbells, as shown in the illustration), the rear leg is held at a slight height, usually knee-high. This isolates the front foot even more, adding to the load on it. Like pistol squats, these are not for beginners, and should only be performed by practitioners who have been doing heavy barbell squats for some time.

This is the variant that requires the most range of motion. It requires extremely strong arms and core muscles, which provide a good balance. Due to the position of the barbell, this variant also requires more forearm (gripping) strength than other variants. Due to this, this variant of the squat works practically every major muscle in the body. Due to the heavy emphasis on mobility, this is probably the hardest variant of the squat, and heavy weights should only be lifted in this style after considerable progress with just the bar and lighter weights.

Many fitness experts, such as Mark Sisson of Mark’s Daily Apple, and Steve Kamb of Nerd Fitness, recommend squats as one of the most efficient exercises, and it’s hard to claim otherwise. Most exercises, even those performed with free weights or bodyweight, are limited in their ability to engage many muscles at the same time. The squat gets over this issue spectacularly.

Unfortunately, many people don’t know how to do a squat properly. More accurately, they have forgotten how to squat properly since the last time they squatted, which was probably when they were kids. Surprisingly, the squatting style adopted by kids is the one that should be adopted by everyone, since it is the healthiest. Straying from the natural style form of squats performed instinctively by children can lead to serious back and knee injuries in adults.

Go deep down, and don’t pedantically stop at ‘parallel’. The more range of motion you muster, the stronger your muscles will be. Don’t splay your feet more than what is required for your natural stance. Push off with your heels, and keep your core engaged while doing that. If you don’t go deep enough (like in power curtsies, for example), you are putting undue pressure on the knee. Likewise, if you are pushing off with your toes, you are using the knee rather than the muscles at the back of it. The knee is not built for this kind of pressure, and, unlike muscles, won’t get strengthened by the excessive workout. Another common mistake is rounding the back. Make sure you are bending at the hips and holding your back in one line.